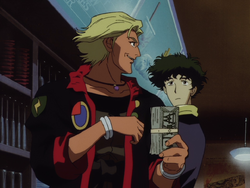 The Woolong (symbol: is the W with only 1 line through it) is the standard unit of currency in the Solar System.

Woolongs could be traded in physical paper notes[1][2] or digitally transferred with special devices.[3]

Poker chips had the Woolong symbol on them.[2]

It was typical of bounties to be in the amount of millions of Woolongs.[2][4][5] Consequently, an amount of 50 Woolongs was trivial.[6]

The Woolong appears to be roughly at parity with the mid-1990s Japanese Yen, or slightly inflated. The latter might not be the case if the probable increased cost of consumer goods in a space-faring society is considered. For instance, a watermelon in "Mushroom Samba" was ₩1000. Whereas in "My Funny Valentine", debts such as ₩30M for a house, and ₩7000 for pizza, are seen. In "Stray Dog Strut", the pet shop worker said that Ein could possibly sold for only ₩200 (mistranslated as ₩2 in the English dub), since the Welsh Corgi is a common species.

If the Woolong is assumed to be at parity with the 1998 Japanese Yen, then conversion may be performed rather easily. It could be assumed that ₩1 is worth about 1¢ US, ½p, or a little less than €0.01.