"I have no fear of death. It just means dreaming in silence. A dream that lasts for eternity."
―Vincent Volaju to Spike Spiegel[src]

"Know much about purgatory? It's the place between heaven and hell, where those who were left behind, unable to get into heaven continue to suffer, a place of struggle and pain. In other words, the world that we're in now."
―Vincent Volaju on his view of the world[src]

Vincent Volaju (ヴィンセント・ボラージュ, Vincent Volaju?) was a soldier in the Mars Army and veteran of the Titan War. During the war, he was a victim of an experimental military project. He later became a terrorist and died during the pursuit. Vincent devoted himself to finding the gateway to heaven at any cost.

Volaju had a lonely childhood. He was drafted into the Mars Army in 2060 at the age of 20 and joined the Special Operations Forces in 2062.

Volaju served in the Titan War, however, he and his unit were subjected to weaponized nano-machines by the Army as part of a series of experiments. The nano-machines replicated and attacked the brain and nervous system before breaking down into proteins and leaving the body. Made of protein and programmed to mimic lymphocytes when outside a source of body heat, they were virtually impossible to detect. Volaju himself was also given an experimental anti-nano-machine in his blood. As a result, he survived but also lost the memories of his life, including a relationship with Elektra Ovirowa. He only remembered fighting and suffering on Titan. Going forward, he had difficulty distinguishing dreams from reality. He also perpetually sees glowing yellow butterflies in his vision, a symptom other victims suffer as the virus takes effect.

In 2068, Volaju was presumed dead. He planned to free himself from what he perceived as his reality, but also in taking down everyone else with him, the purgatory, getting his lost memories back, and finding out where the butterflies he seems to see constantly came from. Vincent's devious plans lead to his most well known achievement: being able to beat Spike in a one on one fight.

In 2071, Volaju started his attack on Alba City. He solicited the help of a teenage hacker, Lee Sampson, to help him procure resources. He had Sampson get a tanker truck which he filled with the nano-bots. He drove it on the Alba City Freeway, parked it, and detonated it, releasing the nanomachine virus on the people caught in the accident. He looked up to see a zipcraft following him (with Faye Valentine inside) before jumping off and disappearing.

Later, Sampson and him drove to a warehouse where another accomplice was helping to load the nano-bots into floats for the upcoming Halloween celebrations in the city. Volaju gave him part of what he was promised, and promised the rest after the event.

Volaju then decided it was time to get rid of Sampson. He waited in his apartment for him to arrive and, when he finished his game of solitaire (of which the pieces contained the nano-bots), broke the last marble in front of him. He left him to die, however, he realized Valentine arrived, having tracked them somehow, so he re-entered the apartment. He subdued her, but not before receiving a shot to his hand, and took her gun. He decided not to kill her, but, rather, give her some of his blood by kissing her. She passes out for awhile, but is all right. He tied her up and, when she awoke, told her some of his story and offered to take her with him after he was through killing everyone on the planet. She denied him, and so he left, simply saying he'll be on the "bridge connecting earth to the heavens." His associate from the warehouse came back just then, looking for the rest of his payment. Volaju simply killed him.

Vincent, under observation by one of Ovirowa's spies, decided he needed to shake them off. He boarded a train, on which Ovirowa herself boards as well and outside Spike is following on top, shooting his way in. Spike encountered Vincent first, who opened fire at the first opportunity, killing at least one civilian in the crossfire. Electra caught up to see the two having a standoff. Volaju, challenging Spike to shoot him, sees her behind him and shoots her instead. Spike takes the opportunity to advance and they fight hand-to-hand. However, Vincent bests him, disabling him with a claw strike to the chest and holding him out the window. He stated he has no fear of death, for it means only dreaming in silence. Electra came running to intervene, calling out to ask him if he recognized her. Vincent, ignoring her and holding Spike at gunpoint, decided to adjust his aim, critically injuring Spike but not to kill. Vincent then armed a grenade and held it aloft before it exploded, destroying the front of the train and unleashing more of the virus, killing the rest of the passengers. He escaped the train.

Volaju went to the Eiffel Tower replica – the bridge – to await Spike and the execution of his plan. Inevitably, Spike came, and a dramatic fistfight occurred between them. The two reached an impasse as Spike is thrown to the ground. Vincent taunted Spike's attempts to be the hero, to which Spike replied he's just a bounty hunter here to pay Vincent back for nearly killing him, and doesn't really give a damn what happens to the world. Vincent then tested this and detonated the Halloween parade floats, unleashing the virus. He fought Spike some more before he succumbed to it. As Vincent stood to execute Spike, Electra arrived. This time, Volaju remembered her, and hesitated to shoot her. She did not hesitate, and fatally shot him. Lying on the floor, he revealed he could finally remember her, and lamented that, since Titan, he was looking for a way out of the nightmare when he was awake all along. He committed his love for Electra, saying the days he was with her were the only ones that felt real, just before dying.[1]

"No one can draw a clear line between sane and insane. You move that line as you see fit for yourself. No one else can. You'll understand soon... that the one that's insane is this world."
―Vincent Volaju[src]

"Halloween is the one day a soul in purgatory can be released. If he prays hard enough, he can go to heaven at last. Say your prayers."
―Vincent, on why he chose Halloween[src]

The record that Ed finds gives context as to the character's birth, drafting in the Mars Army, and "death" in the Titan War.

He is designed combined with both Elements of Johnny Cash and Bob Dylan.

He is visually inspired by Vincent Gallo.

His weapon of choice is a double-stacked competition variant of the Colt M1911. 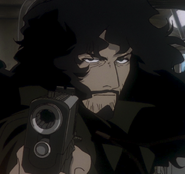