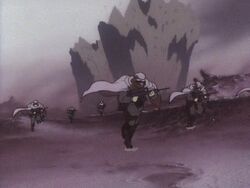 Gren and Vicious served on the same side during the war. Gren admired Vicious for his skill as a warrior, but Vicious, without any need for camaraderie, chose to testify against Gren as a spy. Gren was later imprisoned.[2][3]

Vincent Volaju served in the conflict on Titan until being placed into Dr. al-Hedia's research program. The resulting experimentation caused Vincent to lose his memory as well as hallucinate massive swarms of butterflies that appeared to be made of light. The combination of memory loss and hallucinations caused a psychotic break when Vincent became unable to differentiate reality from hallucination and dreaming. He was declared dead.[1]

Elektra Ovirowa also served in the Mars Army, Special Forces. She came to know and have a romantic relationship with Volaju during.[1]

The War on Titan is not defined exactly in origin or participants, although the Mars Army seems to have participated in the campaign somehow as Vincent Volaju, one of the infantrymen, was affiliated with that faction. Both times that it is mentioned, it is crucial to the backstory of a character who fought in it. The characters involved were victims of an ongoing exploitation by medical experimenters such as Cherious Medical. Gren, in Jupiter Jazz (Part II), describes being imprisoned on charges of espionage and treason shortly after his return from Titan. He goes on to describe his deteriorating mental state as the reason that he was given an experimental anti-psychotic that resulted in a hormonal imbalance causing him to develop breasts.

Titan seems to exist in the series as a symbol of horrific trauma and the wrongdoings of the military and medical industry. It is depicted both in the series and the movie as being a monochromatic and barren desert-scape; the lack of definition in the conflict as well as Titan's apparent lack of habitation or buildings leads us to question what it is that the war is being fought over for in the first place. Perhaps Titan's vast reserves of methane and ethane are a possibility.

Volaju describes Titan in Knocking on Heaven’s Door saying, “There were no enemies there, no allies. Just guinea pigs to test nanoweapons…”