For Carlos of the White Tiger, see Carlos.

"This again, god-damned son of a bitch. Taking my money like that, you cheating dogs. Why, the only reason you can even eat here is cause of what I’ve done. I busted my tail to plant those crops along with my two good buddies."
―Antonio speaking to Carlos and Jobim.[src]

Antonio, Carlos and Jobim are three old men who travel throughout the Solar System and continually encounter Spike and the Bebop crew, however, neither group ever acknowledges having seen the other before.

They claim to have dug an Astral Gate together.

The three went to the El Ray bar on Tijuana to play cards. Unfortunately, the bar was attacked by a syndicate in pursuit of Asimov Solensan, who also went to the bar. They immediately hit the floor when the firefight started and, fortunately, survived. They left to the north side of town to continue playing at the Denis Bar, however, Spike and Solensan had arrived there as well, and a fight broke out.[1]

They went to Spiders From Mars to play blackjack. Spike wished their hand luck and they won, so he took a few poker chips.[2]

They went to Mac's Diner to try to guess Victoria Terpsichore's full name. Unfortunately, they didn't check that their guess actually started with the letter "V" and Terpsichore let them know. They were disappointed.[3]

They often visited the Bohemian Junkheap and hung out with Chessmaster Hex. One day, they met him after lunch when he was surprised by Spike, Faye, and Jonathan. Ignoring them, Hex was excited to tell the old men about his new chess opponent (Edward). Jonathan was angry and started shooting until he was knocked out, but he didn't hurt anyone.[4]

They went to Io and had food at the Pescaderia. They saw Shaft at another table seemingly depressed, so they asked him if he's all right, supposing he lost his girlfriend. Shaft told them to keep to themselves, but, when he saw Edward drive by, he quickly tried to finish his ice cream, causing a headache. The old men came near him with concern, one offering a cure – mushrooms. Shaft left later.[5]

Jobim was wandering by a water fountain and saw Teddy Bomber there. Soon, Spike and Andy came, but they all ran off.[6]

The three were playing cards at the Cafe Ifrane in Alba City when Spike was looking for Mendelo al-Hedia. When they realized he was a bounty hunter, they left immediately.

Later, the three helped Jet Black by flying one of the old planes to distribute the anti-nanobot vaccine during the Halloween celebrations.[7]

Antonio, Carlos and Jovin narrated the preview for Mushroom Samba. Unfortunately, they couldn't remember the story and bickered with each other and ran out of time.[8]

The three are named after Brazilian songwriter and musician, Antonio Carlos Jobim. 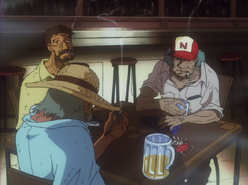 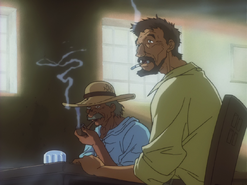 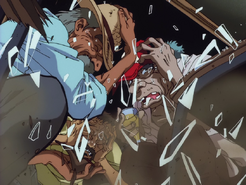 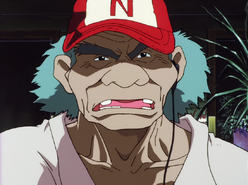 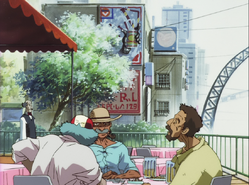 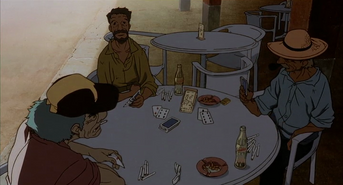 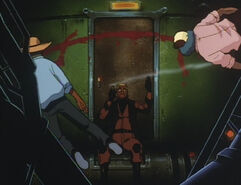 Retrieved from "https://cowboybebop.fandom.com/wiki/Three_Old_Men?oldid=24250"
Community content is available under CC-BY-SA unless otherwise noted.