The Swordfish II was a remodeled MONO Racer built by Doohan. Originally designed for high-speed racing, the craft was given armaments and converted into a space-ready fighter. Spike Spiegel owned and flew the ship.

An old MONO racer, this spaceplane has been modified and refitted extensively to give the craft superior performance and handling. Named the Swordfish II, this racer has been used for over a decade by bounty hunter Spike Spiegel and is well suited for his dangerous line of work. Its incredible speed allows it to rapidly overtake most other aircraft/spacecraft and features numerous high-powered thrusters and a thrust reverser on the main engine that allow for quick stops and near-instant changes in flight. These thrusters grant the craft V/STOL capabilities, lifting into the air with very little need for launch space.

When landed, the two wings can be folded up and over the top of the craft to make the Swordfish II easy to store inside a hangar or ship bay. Like most one-man MONO craft, the Swordfish II features a fully enclosed cockpit pod which can launch from the main body and has limited space flight capabilities.

Utilizing the MONO system (Machine Operation Navigation of Outer space), the Swordfish II can travel in an atmosphere or in space and is capable of both achieving orbit and atmospheric re-entry. The MONO system include various hardware including the airframe control mechanics, navigation system and auto-calculation software. The fusion engine uses a standard aero drive but has been modified with a booster nozzle, which acts as a short-range impulse drive.

For combat, the Swordfish II carries a quartet of internally-sealed machine guns for short- and medium-range firing and also fields a high-powered turreted plasma cannon attached to the ventral side of the fuselage for a long-range punch. The racer also has the option of using missiles on the two hard points mounted on the outside edge of each wing, though Spike's frequent lack of funds means that such weapons are a rare luxury.

Though the ship is well used and appears heavily abused, the Swordfish II is a very robust craft, rarely letting the pilot down. While Spike is an amateur mechanic, his mechanically-adept partner Jet tries to keep the craft in as good a shape as the pair's exploits will allow.

Doohan built the Swordfish and owned it until 2061 when he made some high performance modifications and gave it to Spike. Spike would use the ship for the next 10 years as he teamed up with Jet Black. Spike stored the Swordfish II in the hanger of the Bebop.[2][3] 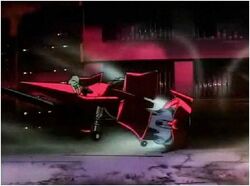 When Spike pursued Giraffe, who was, in turn, pursuing Zebra, Spike had to use the Swordfish to follow. He watched Giraffe get shot out of the window of a high rise hotel, and dove in the ship in order to save him from falling to the ground.[4]

When Spike joined in the fight with Victoria Terpsichore against several bounty hunters, he beat up several of them and threw them out of Mac's Diner. The three bounty hunters promised Spike would never see them again, however, as Spike found out later, they trashed the ship and rendered it inoperable. Terpsichore reluctantly helped tow the ship back to the Bebop so it could be repaired. Jet Black made some repairs, but not all, so that Spike could pursue their target, Decker, to the Linus Mine. There, Spike used the ship's pod to propel explosives to a blocked portion of the mine in order to escape.[5]

Spike brought the Swordfish to Doohan's compound for an overhaul. Despite Miles' suggestions to modernize the hardware, Doohan fixed it using parts from the time. Spike took it out to help catch space pirates, but, unfortunately, their computer virus was injected into the ship, causing it to run out of fuel. Doohan saved the ship (and Spike) by catching the ship with the Columbia, though the ship's wings were both clipped off in the process.[2]

Putting on that bounty pressure!

The jet design is inspired by the Fairey Swordfish.