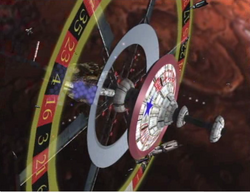 Spiders From Mars was a casino ship orbiting Mars and was owned by Gordon. The ship had a large orbiting ring with several restaurants, silent pictures, slot machines, poker, keno, roulette and mahjong.

The casino was visited by the Three Old Men, Spike Spiegel and Jet Black. While they were there, Spike met Faye Valentine, who was a blackjack dealer there briefly to fulfill a deal for Gordon. She mistook Spike for an agent, and they got into a conflict that resulted in them being pursued by the casino's security. Faye flew her ship, the Red Tail, out of the casino, with Jet and Spike hanging on the ship.[1]

The name is seen on playing cards and cigarette disposal units. The initials "SFM" are seen on the poker chip. The name seen on the elevator screen as Spike and Jet descend to the casino floor, however, is spelled "Spaiders From Mars."

Other store names are also seen including the Golden Nugget.

One of the casino's chips

Retrieved from "https://cowboybebop.fandom.com/wiki/Spiders_From_Mars?oldid=22396"
Community content is available under CC-BY-SA unless otherwise noted.