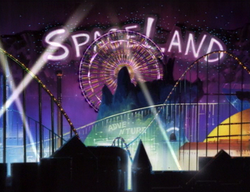 Space Land was an amusement theme park located on Mars.

Space Land occupied its own crater on Mars, and people traveled there by tunnel or ship. It was a huge park, with games and rides including classic "shoot for the target" games, ferris wheels and roller coasters.

Space Land was used by Mad Pierrot when he wanted to fight and kill Spike Spiegel. He "invited" Spike there while the park was not in use. Able to control and turn on the attractions, he set up several traps for him in dramatic fashion. The ensuing firefight caused a lot of destruction to the robotic characters. Faye Valentine flew her ship, the Red Tail, into the park and joined the fight briefly before being shot down. At the end, Pierrot was trampled by a parade of the robotic characters.[1]

The imagery shows many classic games and rides.

There are only a couple games shown in Space Land, but it is assumed there's more. We see a classic "shoot for the target" carnival game where you attempt to shoot balls in a robotic hippo's mouth as it opens and closes.

Space Land is full of many fun and interesting rides.

Pierrot stands at the entrance of Space Land

The Merry Go Round

Some prizes for game winners in Space Land

A car ride in Space Land

A carnival in Space Land

A few of Space Land's mascots