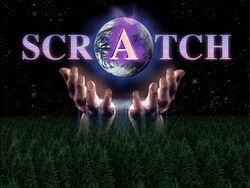 Scratch was a religious movement founded by Rosny Spanngen under a fictitious character named Doctor Londes.

The movement started in 2069. Spanngen, using the Londes character, recruited members based on the premise that he could digitize the human mind, so that it may transcend and live on beyond the physical body. Slowly, the group grew by face-to-face recruitment. A game system called the Brain Dream was to be used for the transference, but, first, one was supposed to cleanse their soul as part of a process before the end goal.

By 2071, the group became as large as 20,000 members and became featured on television talk shows and programs. Unfortunately, about 100 people had committed suicide by then in an attempt to hasten the process. This prompted the ISSP to actively investigate the group and find its leader, Londes. They entered several homes of high-level members but could not find him or information leading to him.

Faye Valentine pretended to join the group in order to find and capture Londes, professing that she could get rid of her debts. The members believed her and she became featured on at least one TV program. Spike Spiegel also met several members in order to find Londes, but the group would not respond to his approach, questioning his sincerity.

The group would later find out that their leader had disappeared.[1]