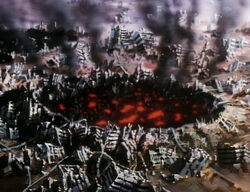 Rock showers are a dangerous phenomena where asteroid debris falls toward a planet.

Earth suffered from periodic rock showers after the Moon was affected by the Astral Gate accident. This resulted not only in massive destruction on the surface in the near term, but also in a significantly-changing landscape of the Earth's crust in the long term, even 50 years later in 2071.[1][2]