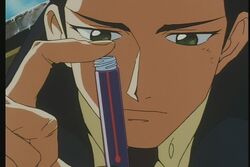 Red Eye (or Bloody Eye) was an illegal performance-enhancing drug applied directly to one's eyes in order to gain enhanced sensory perception and reflexes for a short duration.

Red Eye was stored in glass vials and administered using a specially designed device. The vial snapped into the device, which applied the liquid substance by spraying it directly into the user's eyes. They immediately flared up with redness and irritation, giving the drug its name. Red Eye is similar to a very powerful steroid and stimulant combined into one. It made the user extremely hyper and aware, perceiving time faster which caused everything around the user to appear to move in slow motion. The user gained significant physical strength as well. Continued usage of Red Eye could lead to addiction and injuries to bodily organs.

The Red Eye trade appeared on the asteroid Tijuana as well as on Callisto. It was created and sold by different syndicates. Asimov Solensan worked for a syndicate which created the drug.[1] The Red Dragon crime syndicate dealt in the drug.[2]

In 2071, Solensan decided to leave his syndicate by stealing a batch of "Bloody Eye," a pure form of Red Eye, and selling it in order to ensure passage to Mars for him and his wife, Katerina Solensan. He was able to find some buyers, but the syndicate was able to catch up to him and foil his plans. Solensan also took the Bloody Eye himself in order to demonstrate the effectiveness of the substance and to fight off his enemies.[1]

Gren, on Callisto, obtained some Red Eye in order to facilitate a meeting with Vicious of the Red Dragon crime syndicate. Lin confirmed the Red Eye, but it was eventually destroyed when Gren shot Lin to get to Vicious, and then detonated an explosive in the bag once Vicious was in the air.[2][3]

Not much is known about how Bloody Eye is made. It is said in Asteroid Blues that one vial takes two months to make, implying it is of very high value. When Asimov and Spike are discussing their Bloody Eye transaction, Asimov offers 50 packs of Bloody Eye for 30 million woolongs. Bloody Eye likely never had a legitimate selling price because it has always been a black market product.

It also appears that the user becomes agitated and angry, however Asimov is the only person ever seen taking Bloody Eye so this could be due more to his personality and predicament than the drug. A person on Bloody Eye is known to be quite a force to be reckoned with; Asimov took down numerous men without any weapons while on Bloody Eye, making him seemingly impossible to capture.

The effects of Red Eye on one's vision, as seen through the eyes of Asimov.

Asimov showing the vial of Bloody Eye to a buyer