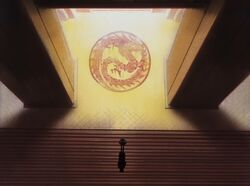 "Just run, Jet, the police can't stop these guys, leave Mars and do it fast."
―Bob[src]

The Red Dragon Crime Syndicate was a structured crime organization based in a skyscraper in Tharsis on Mars.

The syndicate was led in the 21st century by a group called The Van or the Elders: Wang Long, Sou Long and Ping Long. The organization had several exploits, including the Red Eye trade, and employed hundreds of armed guards and soldiers. Mao Yenrai served as a captain or Capo to the Elders and was a mentor to both Vicious and Spike. Other members included Lin and Shin. Julia was closely associated with the organization.[1][2]

As with other syndicates, one of the Red Dragon's rules was that none of their members could leave the organization except through death. This included voluntary resignation and a failure to complete crucial tasks. This resulted in ruthless behavior.[1]

In the late 2060s, Spike decided to leave the syndicate and faked his death, becoming a bounty hunter. He planned to take Julia with him, but, instead, she went into hiding. Vicious, however, had great ambitions in the syndicate.[3]

From 2065 onward, the syndicate was in major conflict with the White Tiger crime syndicate.[4]

In 2071, the syndicate's leaders decided to sign a truce with the White Tiger. One of their capos, Carlos, signed a truce with Mao, however, Vicious, in opposition to the truce, killed both Carlos and Mao along with their guards. His role in the incident was not explicitly known to the Van, though they suspected it.[1][4]

Later in 2071, the syndicate suffered a large transition as Vicious made his move. Vicious initiated an attack on the Van and its guards, however, they were prepared and, instead, Vicious was captured. The Van also sent groups to kill anyone connected to Vicious, and succeeded with Julia. Just before executing Vicious, however, his men killed the Van's guards, freed Vicious, and allowed him to kill the Van personally. Vicious then declared himself the leader of the syndicate.[3][5]

Soon, however, Spike came back to the syndicate in a strategic attack that killed many syndicate men. With help from Shin, he made it to Vicious at the top of the syndicate's headquarters and they dueled. With several remaining guards watching, the two fought. Vicious was killed while it remains unknown if Spike was killed in this encounter or not.[3]

Not too much is known about the crime syndicate. It is an East Asian Triad and Yakuza-inspired organization. The Van are usually seen wearing imperial Manchurian-Chinese clothing of the Qing Dynasty. The Syndicate specializes mostly in assassinations, but are also involved in the trafficking of narcotics.

Annie (or perhaps her husband) could have been a member of the Syndicate – it is not stated explicitly. Julia's membership was also not clearly stated.

Mao is most likely the one who brought Spike and Vicious into the Syndicate (since entering into a major criminal organization usually requires sponsorship from a higher-ranked member).[citation needed]