"Well, if you're looking for company, you're just my type!"
―Julius hitting on Spike Spiegel[src]

Julius was a drag queen, paid to hook up with guys.

He wore a long, red skirt, and a thin, black shirt. He was also seen wearing a large, white fur coat, but only over his shoulders. He keeps his arms outside the coat. He also wears red gloves, and holds a smoking pipe. As for his physical appearance, Julius is a bulky man with a thick face. He covers his face in big dark red lipstick, and light blue eye shadow on his green eyes. He also wears a blonde wig, with hair going down just below his back. It also hangs down his face, going right at nose level. He has thin blonde eyebrows and a burly bit of aftershave on his face. 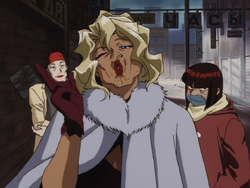 While on Callisto, Spike ran into Julius while looking for Julia. He asked people around if they have seen her, and one man responded that he sees a Julia every day outside Tony's place (mistaking the name Julia for the name Julius). So Spike headed over, and met Julius, who explained he's not the person Spike is searching for. She then continues on to tell him Gren might know Julia, as he's seen Gren with women all the time, and plays Saxophone at the Blue Crow. Spike takes the lead, and begins looking for Gren.

Julius is a very feisty character, with a straightforward attitude. He hits on any guys he finds attractive, even if they're straight. He'll even toy with guys he knows won't hook up with him, just to make them blush. He is highly flirtatious.[1]