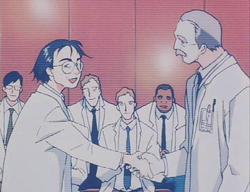 The Hyperspace Gate Project was a project in the Gate Corporation to design and build Astral Gates.

The Project hired Hex in 2003 as a designer and made significant contributions. Hex recommended further testing when the Corporation wanted to start building the gates in 2021. He continued to argue, but the Corporation instead fired him and built the gates anyway.[1]

Retrieved from "https://cowboybebop.fandom.com/wiki/Hyperspace_Gate_Project?oldid=21670"
Community content is available under CC-BY-SA unless otherwise noted.