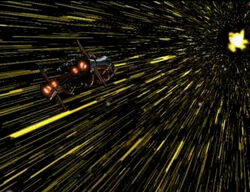 Hyperspace is a type of space in which ships can travel faster than light.

Hyperspace was used to enable travel between planets and moons in the Solar System, previously impractical. This included passenger travel and prison transfers.[1][2] It was possible to receive communications while in hyperspace.[3]

One entered hyperspace through special gates called Astral Gates.[4] Once in hyperspace, a ship could only travel along the path to the next gate, however, the ship could turn around multiple times near the path as long as it didn't stray too far. Straying too far from the path resulted in damage or destruction.[5][6] However, it was also possible, using a sunstone, to create a pocket of hyperspace formed off the path that could hold a ship inside that would be undetectable to those traveling by.[6]

If a terminal gate was closed while objects were inside, they may be perceived in real time but can never interact with matter on the normal plane of reality.[5]