"Gateway Shuffle" is the fourth session, or episode, of Cowboy Bebop.

After escaping from the Bebop, Faye Valentine runs out of fuel in her ship, the Red Tail, and drifts through space near Ganymede. Eventually, she encounters a wrecked ship with a homing beacon and decides to investigate.

Meanwhile, Spike and Jet order breakfast at a Ganymede space port restaurant where they've tracked down a bounty head named Morgan. Using a pair of Steampunk-inspired computerized glasses with face morphing capabilities, Jet confirms with 94.2% accuracy that the target is Morgan.

Also eating at the restaurant are the Space Warriors, a group of eco-terrorists, with their leader Twinkle Maria Murdock. The Space Warriors confront Morgan when he boisterously demands his Sea Rat Sauté. They pull out machine guns and open fire on everyone at his table and around the restaurant. They drop a canister behind that emits a hologram and upbeat tune with a female's voice introducing their group and their mission to protect the environment.

Jet, under the table, now remembers that Twinkle Maria Murdock has a 25 million Woolong bounty on her head. Spike sneaks around and stops Murdock at gunpoint before she can escape. While Spike and Jet are forced to leave without Morgan because he's been killed, the rest of the Space Warriors are forced to leave without their leader. On the Bebop, Jet refreshes his memory on the organization, but, unfortunately, he also finds that the bounty on her by the Ganymede government was dropped. The Ganymede ISSP Chief Minister had negotiated with the Space Warriors who threatened to release a virus unless the ISSP brings them back Twinkle Maria, whom they affectionately call Mom.

Faye finds a man in a life support pod named Gett inside the wrecked ship, asking her to bring a case to the ISSP. She would rather he live, but he succumbs to his wounds, unable to tell her more. Faye is left to ponder the case, and, finding her curiosity too strong, opens it, unaware of what it holds. It is a gold object, unfortunately the same one that the Space Warriors keep their virus in.

Jet then receives a communication from Faye, still out of fuel and hoping to flag down a passerby. The two amusingly listen to her plea for help without responding until it dawns on her that it is the Bebop.

Faye is handcuffed to a ladder on the Bebop while Jet tries to track down more information about the bounty's rescinding. Spike, meanwhile, rummages through Faye's belongings and finds the gold object, catching Murdock's attention but no one else's. While Spike twists the object to get it to open, Faye says he should give it to the ISSP like she was told to, probably for a reward. Spike doesn't believe her. Jet then gets in contact with his own friend, Bob, who is a part of the ISSP on Ganymede. At first Bob won't talk about the cancelled bounty, but Jet blackmails him by implying that he knew Bob stole confiscated "illegal eye drops" (possibly Red Eye) back when Jet and Bob worked in the same department.

While Spike continues to inspect the gold object (and drawing subtle irritation from Murdock), now stomping on its protective shell, Bob informs Jet of the whole story. Ganymede is being held hostage under threat of a virus called Monkey Business that affects the 2% difference between human and monkey DNA structure and mutates all humans into monkeys while leaving all other animals and plants unharmed.

As Spike finally shoots the shell, unknowingly protecting the virus inside, Jet catches the inner casing and decides to let her go. Without a bounty to collect, the Bebop is forced to airlock with the Space Warriors’ ship and release Twinkle Maria Murdock, but not before Spike covertly slips the virus sample into Maria's pocket.

Back in "negotiations," the Chief Minister says he passed a bill to limit the harvesting of Sea Rats but Twinkle Maria wanted to prohibit Sea Rat harvesting. She decides to demonstrate the virus's power by releasing it into Ganymede. Furthermore, she uses Harrison as part of the test as punishment for his earlier failure.

ISSP Cruisers pursue the Space Warrior's ship into the Wasteland Sector but learn the ship is a decoy when it explodes and takes them out with it. Twinkle Maria makes a speech on a live broadcast and Spike tracks their signal as coming from hyperspace. They are launching the virus from their ship in hyperspace and Ganymede has therefore renewed the bounty, giving the Bebop ample reason to go after them.

Spike immediately takes the Swordfish II out into hyperspace. He manages to take out two missiles with his charge cannon but can't recharge fast enough to hit the third missile. Meanwhile, Faye has escaped again, refueled her ship, and gone into hyperspace herself. Faye offers her help for 60% of the bounty to handle the third missile in the Red Tail. She engages the third missile, however, it breaks off into a cluster of warheads. They soon learn they need to disengage and escape from hyperspace through the Astral Gate as it is being closed by the Ganymede government. They barely make it, and the cluster missiles are trapped in hyperspace on another plane of reality without hitting anything. The Space Warriors' ship, however, is trapped. They slow down rapidly, all pushed forward including Murdock. The sample virus escapes her pocket and, as she realizes Spike put it there, smashes the window, releasing the virus into the ship's cabin and infecting the Space Warriors.

Back on the Bebop, Faye consoles Spike and Jet on losing their bounty but says they'll make some big bucks on the next one, effectively joining the crew on her own terms while they slowly realize what she said. Spike asks Jet if he heard what he thought he heard, but Jet doesn't want to hear it said aloud, preferring to lay quietly.

“Attention. We the Space Warriors are eco-soldiers who work night and day to preserve the environment and protect endangered species all over the universe. Thank you for your cooperation.”
— Space Warriors hologram message

“Please do not associate us with common terrorists. We are warriors of peace fighting a noble battle for the law of nature.”
— Twinkle Maria Murdock
“Yeah yeah. We saw how peaceful you are.”
— Spike Spiegel 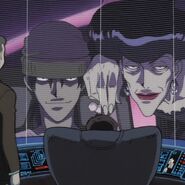