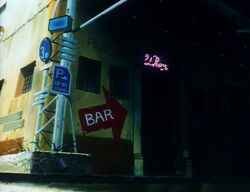 The El Ray was a bar on Tijuana.

The bar's bartender decided to purchase Bloody Eye. He got in contact with Asimov Solensan and arranged a meeting at the bar. Solensan and Katerina Solensan arrived to make the transaction. They were in the process when Solensan's former syndicate allies came to kill them and take back the Bloody Eye. The bar was destroyed.

The Three Old Men would sometimes play cards at the El Ray and were there when the shoot-out occurred. Fortunately, they survived.

Jet Black, on the trail of Solensan, arrived at the bar and was able to subdue others looking for him in order to get information.[1]

The scene at the El Ray is an homage to Robert Rodriguez's Desperado. The bar is a replica of a bar in the movie, which itself was filmed in Acuña, a city in the Mexican state of Coahuila.

Retrieved from "https://cowboybebop.fandom.com/wiki/El_Ray?oldid=23134"
Community content is available under CC-BY-SA unless otherwise noted.