Edward was born on January 1, 2058 on Earth.[1] Her father, an eccentric man who was forgetful with anything but his work, left her at a day care center in 2064 and forgot to pick her up. Edward then spent two years in the care of other people before wandering into an orphanage in 2066. Under the care of Sister Clara, She was quickly part of the family there.[2] Her best friend during her time there was a boy named Tomato who was also passionate about computer science. She named her computer Tomato after him.[3] Having grown up without parents, she gave herself the name Edward Wang Hwe Pepel Cybulski 4th. In 2068, Ed fled the orphanage for reasons unclear to Clara: perhaps to search for her father, or perhaps out of a desire for freedom.[2]

One day, Edward discovered the Bebop was on the way to Earth and hacked the ship. She found out that Jet and company were on the trail of a mysterious hacker guilty of vandalizing the surface of the earth by tampering with a satellite. Ed then discovered that the culprit was actually the software of the satellite itself. Naming it MPU, she wanted to help MPU evade capture. In exchange for her help, she extorted Faye Valentine to promise to make her a member of the crew by helping them get MPU off the satellite and using a copy of him to cash in the bounty. The plan worked, however, the Earth Police Department didn't pay a bounty on it since it wasn't a living thing. Nevertheless, Ed waited for the Bebop to pick her up. Faye tried to leave without her, but Ed managed to get what she wanted by taking control of the Bebop through her computer, forcing the crew to take her on board in order to leave.[4]

When the Fridge Monster threatened the ship, Edward helped Spike Spiegel try to track down the creature, but It ended up wandering off in an isolated area and fell asleep. She came across the creature accidentally and ate it, dreaming about pudding.[6]

Faye had wanted to understand anything in the beta cassette that could tell her about her life. Ed, curious but also half asleep, sat next to her one night and revealed she may know where it is. Faye commandeers the Bebop and straps Ed to her ship on Earth to find it. During the trip, they pass by the orphanage that Ed used to live in. Ed knew there would be good food there, and reunited with the other children. Ed learned her father had been there looking for her. They go back to the Bebop and Faye, after recovering her memory, left again and convinced Ed to follow her heart. Ed made up a (misleadingly high-looking) bounty on her father as an incentive to Spike and Jet to find him. They did, and Ed drove the Bebop to their location to meet him. Overjoyed,she leaped down and her father offered to take her with him, however, another meteor struck, prompting them to leave immediately. Ed went back to the Bebop but made the decision to join her father. On her way, Ein caught up and insisted on staying with her, even after she said he didn't have to come with her.[2] 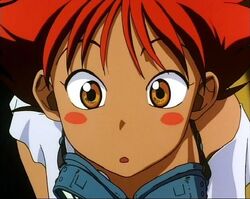 Ed is a skinny copper-colored teenager with tufts of bright red hair. She is drawn with red cheek marks to accentuate her youth. Edward wears a loose midriff-bearing sleeveless white shirt, showing her navel, compression shorts, and never wears footwear of any kind. Once she attempted to wear socks in Mushroom Samba but she immediately lost her balance, suggesting she may have never even worn shoes. She permanently wears a pair of large green goggles on her head or dangling from her neck. The goggles hook up to her computer and allow her to "net dive". Her somewhat androgynous appearance often causes her to be mistaken for a boy.

Ed is an eccentric, resourceful, giggly, childlike, odd curious, happy-go-lucky and extremely intelligent teenager. Ed has many attitudes, typically manifested by eccentric geniuses, such as a great susceptibility to distraction, and a tendency to talk to herself aloud and sing nursery rhymes or other literature popular among children. She often repeats the last words of the people who spoke before her and answers questions with seemingly meaningless phrases and sometimes real nonsense.

She could be considered sort of a "free spirit", very fond of nature and open spaces. She eccentric behavior is the primary source of humor in the anime.

Ed also shares numerous behavioral characteristics of a wild animal. In particular, in regards to her tendency to bite people and her way of walking, in fact, She is always barefoot and shifts to four-legged, rolling, or on the palms of her hands. She even uses her feet for tasks that would normally take place with the upper limbs. On one occasion, She proves to be unable to walk wearing a pair of shoes (Session 17: Mushroom Samba)

However, Watanabe also said that "Her gender is meaningless, we don’t need it." and "I wanted to create a character that surpasses humanity. I personally think that it might not even be human, someone from outer space."[11]