The Bebop is a converted interplanetary fishing trawler owned and captained by Jet Black. It was the primary residence and transport for a crew that consists of Jet, Spike Spiegel, Faye Valentine, Edward, and Ein. The ship traveled throughout the Solar System to places such as Mars, Tijuana, Ganymede, Venus, and Earth.

Originally built to catch and transport fish from the seas of Ganymede, the Bebop was purchased second-hand by Jet, who installed larger engines and upgraded the communication system.[1]

A Ganymede rock lobster was left in a fridge in the attic for too long, causing an unknown creature to gradually subdue the crew. The ship was put on autopilot, destined for Mars, while Spike took the creature on.[2]

When Faye realized Ed knew something about her old home on Earth, she commandeered the Bebop and left it there without telling Jet or Spike.[3]

The Bebop was attacked by the Red Dragon Crime Syndicate in an effort to kill Spike. Spike and Faye reach their ships to fend them off, but the Bebop was damaged in the fight.[4]

The front part of the ship looks very much like a normal seagoing vessel with a V profiled hull. The aft section that contains the engines is formed wider like wings, or the side hulls of a trimaran ship. The most functional interior space of the ship is in the middle part.

The bridge is located directly above the main hangar. It resembles the deck facing bridge of a fishing vessel, minimalist and overlooking the main deck. The bridge is lined with large double windows with circular frame elements. There is a single window at the middle, directly facing forward, and three more on either side completing the curve backward to form a U shaped floor space. There are also two trapezoidal windows in the ceiling for observing above the ship.

At the very front of the bridge there is a workstation for long distance communications. This seat is the one directly facing the front window. Right behind the comm-officer's station there is a charting table. It is about 2 x 3 meters covering the middle part of the bridge. Characters are often seen manipulating the table which has a touchscreen like input system. The technology of the console seems to be more modern than what is usually seen in the Bebop. Just above the chart table, there are gauges for many systems and a radar, stacked side by side as circular screens. At the port side, towards the rear and somewhat elevated, is the helm, the control station for piloting the ship. Jet is often seen here piloting the ship when Spike and Faye are off in their fighters. There are a multitude of levers in the console, and a comm screen for speaking to other ships. It is not seen to be used for long-distance communication.

The bridge ends aftward with the access stairs down to the hangar space, from where there is a hatch to the rotating midsection.

All living spaces in the ship are placed inside the rotating inner hull of the ship, where the interior is provided with artificial gravity by the centrifugal acceleration on the edges of the cylinder.

The rotating inner hull starts from the end of the main hangar, with the rotating midsection is also visible rotating on the outside. On the inside, characters are often seen walking down this rotating aisle, or using it for passing from one room to another. It is shown to generate gravity rotationally at its outer edges, characters are able to float in anti-gravity by not walking on the floor, as displayed by Ed. Along the corridor, there are hatchways for accessing the hangar and bridge towards the front, and the crew quarters towards the back.

This is the room we see the characters spending most of their time on the ship, oftentimes watching Big Shot, doing research, eating their meals or just hanging out. The furniture consists of a couch, a table and a chair. It is a large single space room with a high ceiling. It is connected to the kitchen with a round walled corridor, that also leads to other common utility rooms such as the toilet and the workshop. On an elevated platform, there is another set of seating and the small refrigerator. 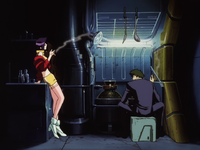 The galley is accessed from a corridor leading to the living room. It has an industrialist layout, the stoves resembling blowtorches, with piping visible throughout the space. This room is mostly used by Jet, unless Spike and Faye use it as a smoking zone when guests are on board. The galley has its own fridge for food storage. Jet prepares his famous Bell Peppers and Beef here.

Jet cares for his bonsai trees here. It also has a desk, an intercom, an analogue clock and a screen. This may lead to the conclusion that these were the captain's quarters when the Bebop was a fishing vessel. 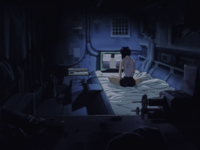 Faye has her bed and (later in the series) video equipment to watch Betamax videos here. We see it in Hard Luck Woman when Faye is watching the video from her past. 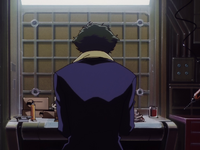 We only see Spike servicing his weapons in this room, but it's probable that this room is used by other crew members as well.

We see it first when Faye is locked here in Honky Tonk Women. It is accessed from a corridor leading off from the living room and the kitchen. The crew commonly use the bathroom as a holding cell for bounty targets. 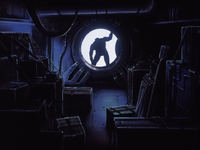 The storage room contains loose cargo that is not used on a day-to-day basis. We see the room in Toys In The Attic where the refrigerator stored here becomes infested with creatures evolved from the food neglected inside for many years.[2]

The main hangar is in the foremost part of the upper deck, connecting to the flight deck with a gate. The zipcraft of the crew usually take off from here. The main hangar is accessed from the same hatch from the rotating midsection as with the bridge. The hatch leads to the second floor of the hangar.

The voice of the ship was played by Kaoru Morota (Japanese) in Toys In The Attic.

The Bebop crashed on Io in "Mushroom Samba"