Sympathy for the Devil

"Ballad of Fallen Angels" is the fifth session, or episode, of Cowboy Bebop.

Mao Yenrai, Capo of the Red Dragon crime syndicate, and Carlos of the White Tiger crime syndicate meet at Mao's high rise to sign a truce agreement. They are both tired of the bloodshed that has affected their rival organizations. After they sign the deal, Carlos expresses his satisfaction and leaves with his group. Mao watches them leave, expressing his satisfaction, however, the ship explodes. Vicious, a member of the Red Dragon syndicate, and his henchmen burst into the room and kill everyone but Mao. Mao states the futility of his treachery, but Vicious doesn't respond. He then uses a sword, his weapon of choice, to kill Mao. Before he collapses, Mao intimates that Spike could have prevented this. To this, Vicious pauses and smiles.

Jet and Spike find a new 28 million Woolong bounty is placed on Mao Yenrai for an unknown crime. Spike is ready to go after a lead they have but Jet is worried about the bounty and thinks Spike is hiding something he knows about Mao. Spike doesn't confirm this and, instead, asks Jet how he lost his arm, to which Jet doesn't respond, confronting him on its relevance.

In the middle of this, Faye arrives from shopping and tries to join the conversation but is told to stay out of their business. Spike decides to pursue his own leads and leaves the room with Jet yelling after him. As he takes off in the Swordfish II, Jet yells over the communications that he won't be responsible for him, but Spike, not skipping a beat, is all right with that.

Faye continues to read the bounty information and teases them about having a fight, but Jet turns the display off, calling her obnoxious and leaves the room. He digs more into the bounty information, but finds suspicious information. Faye, however, sees a video signal comes into the computer with a new lead on the bounty, and she answers the call. The lead takes her to an opera house where she can find Mao Yenrai at his box seat. She is dressed for the formal occasion, and passes herself off as Mao's date, not needing a ticket. She finds Mao's opera box, but, oddly, she's told she was expected and feels a gun in her back. Furthermore, the men know who she is, having done a background check and have the keys to her ship. She's told to sit through the opera performance. She looks over and, horrified, sees Mao's corpse. She also meets Vicious.

Spike, meanwhile, goes to see Annie, an old comrade from the Red Dragon. Now, she runs a shop and runs into Spike while chasing kids who stole something from the shop. She's horrified to see Spike, as she thought he died three years prior. She tells him what happened to Mao, fully aware of how Spike will react – by going after Vicious. She pours a drink for Mao, which Spike snags for himself. She also gives Spike a gun and bullets while realizing there's no point in dissuading him from engaging Vicious.

Back on the Bebop, Spike retrieves grenades and more guns. Jet tells Spike that Faye is off following whatever she thinks is a lead for the bounty. He also tells him he's walking into a trap – that Mao is already dead. Spike calmly says he already knows, but he has a debt to pay off. Jet decides to relate that he lost his arm by being headstrong, but Spike is resolute. Faye then calls in to the computer's video phone to ask them to rescue her from Vicious. Jet wants to leave her to her own situation, but Spike agrees, saying it's not for her.

Vicious waits for Spike at a Cathedral. After a few brief words where Vicious explains he killed Mao for "losing his fangs," Spike hears Faye and draws his weapon. Her captor orders him to drop the gun, but is instead promptly killed by a bullet to the head. Spike then proceeds to kill the henchman and Faye escapes. Spike eventually races upstairs towards Vicious, killing people as he goes. On the stairs, Spike is hit, but he continues. He reaches a balcony next to a large stained-glass window where Vicious is hiding. They duel with gun and sword respectively, both drawing blood. At a quick stalemate, Vicious states that the same blood runs through them both, however, Spike says he's bled it all away. Enraged, Vicious ends the stalemate and they wound each other. Vicious then manages to grab Spike by the face and throw him through the window, but not before he deftly tossed a grenade behind him.

As Spike falls to the ground, his former life flashes before his eyes mixed in with the grenade's explosion through the window. The images speak without context but show Spike fighting alongside Vicious; Vicious in bed with Julia, and Spike walking underneath Julia's window with a bouquet of red roses, which he uses as a cover for a gun to fight. Spike then recalls a memory where he is recovering from injuries at Julia's place, and she is humming. In the present, instead, Spike is awoken from the memory, injured and back on the Bebop. It's been three days, and Faye was the one humming. She says he should be grateful for her, but, instead, he tells her she is off-key, prompting Faye to smack him with a pillow and storm off.

“When angels are forced out of heaven, they become devils. You agree, don’t you Spike?”
— Vicious
“I'm just watching a bad dream I never wake up from.”
— Spike Spiegel
“I’ll wake you up right now.”
— Vicious

Among the weapons Spike prepared for the fight was a Ruger P85. 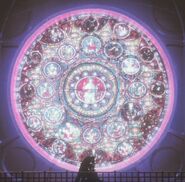 Retrieved from "https://cowboybebop.fandom.com/wiki/Ballad_of_Fallen_Angels?oldid=23653"
Community content is available under CC-BY-SA unless otherwise noted.