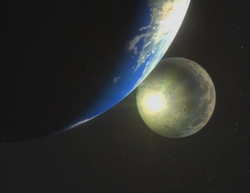 The Astral Gate accident was an incident in 2022 AD, in which the first Astral Gate, built in orbit around Earth's moon Luna, was destroyed.[1][2]

The explosion shattered a massive portion of the moon, resulting in lunar debris moving outward.[1][3] Some of this debris absorbed energy that could be amplified by the sun. These were called sunstones.[4] Energy produced could also break a person's circadian rhythm. This happened with Wen, prohibiting him from aging at that point forward.[5]

Much of the lunar debris fell to Earth with the same frequency as rain. The resulting rock showers would devastate the planet's surface, killing 4.7 billion people.[1][3] The devastation also destroyed infrastructure, and many records were lost.[6]

In the aftermath of the incident, the human race numbered only 1.5 billion. Rock showers continued, forcing its few remaining denizens to shelter themselves in underground cities. With reconstruction rendered impossible by the rock falls, there was a much bigger incentive for humankind to populate other planets.

Retrieved from "https://cowboybebop.fandom.com/wiki/Astral_Gate_accident?oldid=23488"
Community content is available under CC-BY-SA unless otherwise noted.