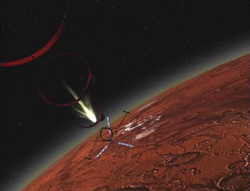 An Astral Gate was a device created by the Gate Public Corporation through its Hyperspace Gate Project to enable travel through hyperspace within the Solar System. They made interplanetary travel possible within a matter of hours, a feat not achievable before their inception.

The gates charged a toll on all traffic through the gates.[1] As a ship passes through, a communication would come to each ship to announce their destination and gate fare.[2] The gates could be shut down while the ships were in transit. In this case, the ships would forever be stuck in hyperspace, regardless of whether the gates were reopened. Those on the outside of the gate would see a transparent image of the ship coming out, though it is only an image.[3]

The first Gate was built in 2021. In what came to be known as the Astral Gate accident, Earth's Astral Gate malfunctioned and exploded, destroying the Moon and killing a significant fraction of Earth's inhabitants. As a result, planet Earth was rendered almost uninhabitable, with ongoing rock showers from the falling debris. The majority of humans have since abandoned the Earth and settled on other planets and satellites in the Solar System.[4]

Over the next few decades, more gates were built and eventually they were deemed stable enough for travel. As a result, colonization increased and the food was much cheaper and more available. This also decreased reliance on regional foods like the Ganymede Sea Rat.[3]

Unbeknownst to the public, the Astral Gates were prone to security breaches, most notably when 20 unrelated thieves and one criminal mastermind hacked into bank scans on the gates and stole Woolongs from unsuspecting travelers.[1]

The Ganymede Astral Gate was closed when the Space Warriors threatened the moon. Their ship was trapped.[3]

Dark Gates are travel routes kept secret from the public, and used by organized criminals. A special device is required to navigate these hyperspace areas.[7]

Closing gate after a ship comes out