Asimov Solensan (アシモフ・ソーレンサン, Asimov Solensan?) was a high-level member of a crime syndicate and bounty head. He was killed by his wife, Katerina while attempting to escape from Spike Spiegel, as he had a bounty of 2.5 million ₩.

Asimov was a major player in his syndicate until he killed his own guys in a shootout against a rival syndicate and took off with the performance drug, Bloody Eye, intending to start a new life on Mars with his wife, Katerina. He then became on the run with her while selling as much as possible of his stolen Bloody Eye as he could. He also used the Bloody Eye to enhance his fighting abilities when he gets in trouble with the Syndicate or anyone else. It increased the amount of adrenaline in his bloodstream giving him superhuman strength, reflexes, and speed. It also, however, took its toll on him, as his over-extended use caused delusions of grandeur and his appearance to degenerate.

One of his potential buyers was a man in the El Ray bar. In the back of the bar, Solensan demonstrated the Bloody Eye on himself, however, the rival syndicate soon arrived and the resulting firefight killed the buyer. Solensan, under the full effects of Bloody Eye, was able to kill them all before Katerina was in danger. They had to move on, knowing that this would attract the ISSP on their tail.

Spike Spiegel and Jet Black eventually hunted him on Tijuana. Solensan "met" Spike in a bathroom while coming down from his Bloody Eye episode, then followed him discretely, suspecting a trap, while Spike talked to his wife. While they talked, he attacked Spike from behind and drove off with Katerina. On his next attempt to sell Bloody Eye, he realized Spike set a trap for him and attacked him, however, without the full benefit of Bloody Eye, Spike was able to best him. Under interference from an attack by a rival syndicate, he escaped with Katerina and he decided to charge the ISSP barricade of the Astral Gate to escape. Unbeknownst to him, Katerina had increasingly believed that Asimov would not be able to follow through with their plan and, rather than be captured or kill the police officers with them charging ahead, she killed him en route.[1] 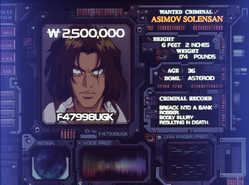 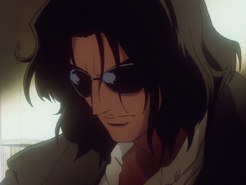 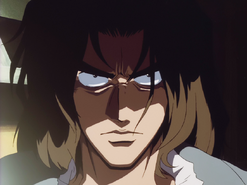 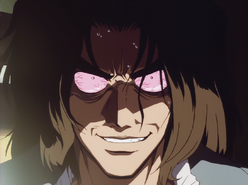 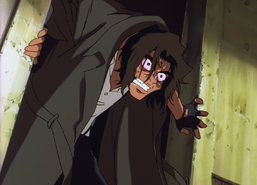 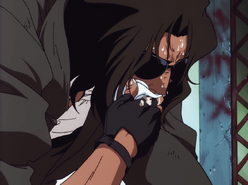 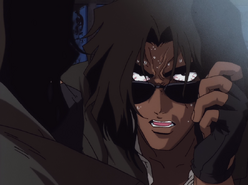 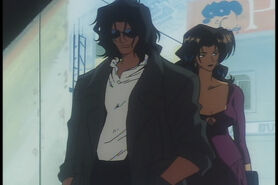 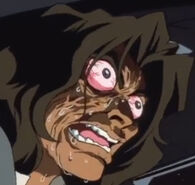 Asimov after "Bloody Eye"
Add a photo to this gallery

Asimov's appearance seems to be inspired by Antonio Banderas' Mariachi character from the movie Desperado. Both men have long brown hair, medium skin, dress in dark clothes, travel with a beautiful latina woman and are able to defeat a bar full of dangerous henchmen sent to kill them.

Retrieved from "https://cowboybebop.fandom.com/wiki/Asimov_Solensan?oldid=25190"
Community content is available under CC-BY-SA unless otherwise noted.